The town of Harwich, situated on the mouth of the the Rivers Stour and Orwell has been an important port for centuries. The town’s name derives from the Old English here-wic, meaning “military settlement” and received its charter in 1238, although it is likely it was established long before this time.

The Royal Navy established a dockyard here in 1652 for around 60 years, and although there is no longer a navy presence here the port was important during World Wars and has been an important commercial port for “travel to the continent” for decades. There is a large area we used to simply refer to as “The War Department” as a kid which is filled with reinforced concrete bunkers, towers and gun emplacements and was a wonderful place to play as child. I recall stories being told of how the guns there shelled the German battleship Scharnhorst when it passed along the coast, although I cannot verify them.

There is also an older fort, simply called The Redoubt, that was built in 1809-10 to defend against Napoleon, which again emphasises the strategic position of the town over the centuries.

Harwich is also famous for being the birthplace of not only the Captain of Mayflower, Christopher Jones (c. 1570) but also the famous ship itself. The Mayflower, which went on to carry The Pilgrims to the New World, was likely built at Harwich and was certainly registered as being “of Harwich” in the 1609-11 Port Books.

A walk along the docks and port of Harwich to Harwich Green also reveals an unusual building – the treadwheel crane. Using mechanics that was largely unchanged since the Roman period this is a human-powered lifting device was built in 1657 in the Naval Yard. It was moved to the Green in 1932, and is the only double wheel treadmill crane in Britain. It fascinated me as a child, and seems to stand as a sort of testament to past labour associated with the town.

Trinity House, the official keeper of lighthouses and deep sea pilotage, has been an important part of the town for a long time with pilot boats guiding vessels into the ports and lightship and buoy maintenance being conducted here.

Unlike many coastal towns, Harwich never really became a seaside resort, maintaining its position as a “working town” and letting the neighboring town of Dovercourt take the tourists.

Nevertheless, it’s not all work, and there is fun to be had if you look for it… 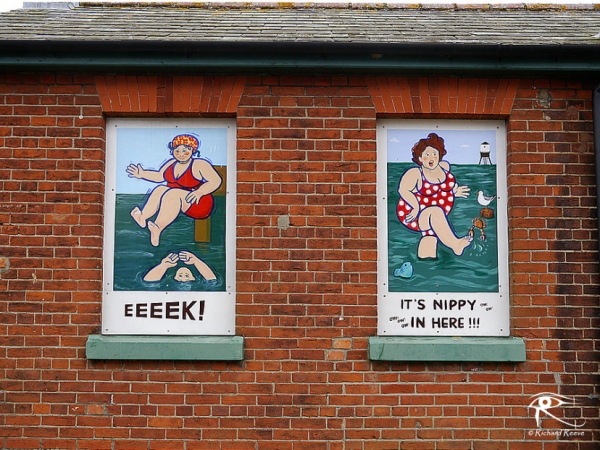 One thought on “Beautiful Britain – Harwich”