I wrote this originally as a six sentence story in March, 2016. Perhaps I was having a Nostrodamus moment…

Today is THE day, so get out there, fellow Americans and HAVE YOUR SAY. If you don’t vote today, in one of the most important elections we have ever had, then you have no right to comment come tomorrow.

I have done my civic duty, so come tomorrow I will be commenting, one way or another!
~Richard

How I wish the late great Frank Zappa was here to see this, and poke fun at the system. He was a great defender of democracy. In his absence all I can do is link to his video, with such an important message:

“Fellow students, I stand in front of you this morning to ask that you use your vote wisely and vote for me as your 8th grade class President for Washington Middle School. Why, you may ask, should I cast my vote for you when the is another candidate to choose from? What makes you so special?

Well, I’m standing in front of you now to tell you why.

Frankly, I’m the best person, and that’s why you should vote for me! I’ve got your back, unlike my opponent who is clearly part of the establishment. You just have to look at her to see how the system is rigged so that that she just assumes she is going to win and then collude with the school administration to keep you in your place. With all her previous experience in the debating club and running the bake sale to raise money for the school you’d think she had your interests at heart, but is it true? I ask you, when she helped with the crossing guard was she really doing it for the good of the school or was there an ulterior motive behind this seemingly compassionate move? I’m not saying there was, I’m just asking you to consider it.

Also, we recently found that her attendance record hasn’t been 100%, she was removed from school early due to “doctors appointments” on two occasions this year alone! And, I know she was excused from gym only last week! You just have to ask yourself – does she really have the stamina to run for this office?

And if you think that’s all, you’re mistaken. Supporters of mine also found several pieces of correspondence from her family to the school office asking about the test scores, how we are being assessed academically this year, and even questioning the number of “snow days” we may have! They also tried to get the school to change her elective from photography to pottery, even though she had started the course! This sort of manipulation of the machinery of our education is simply unacceptable!

This corrupt behavior obviously means that my opponent is simply unfit to be your 8th grade Class President.

By contrast, I will ensure that we have ice cream every day at lunch time, which will be paid for by the teachers, and that we win all football games from now on. Don’t ask me how, we’ll just do it!

So vote for me and I’ll make 8th Grade great again.

And, by the way, anyone that says I was seen kissing Lucy over the summer at the pool is simply a liar who wants to besmirch my great name.”

If this sort of approach was used in school I would expect the student’s teacher to coach them on how to deliver a speech using reasoned argument, logic and facts, rather than spouting rhetoric and vague insinuations. Yet, as we enter the final days of this hideously drawn out circus show that we call the 2016 Presidential Race, all I see is similar negativity, schoolyard finger-pointing, and insubstantial pseudo-arguments with almost no let up – from both sides.

All I can say is I cannot wait for it to be over, but most importantly: PLEASE GET OUT and VOTE on November 8th, otherwise you have no right to complain about the outcome on Wednesday!

In a few hours we can breathe a collective sigh of relief as this part of the circus show draws to an end. I am sure the results of the “debate”, if one can really call it that, will be hailed as a victory for both sides some the late evening. No doubt tweets will fly and the insults will keep flowing.

The great country was once hailed as the greatest democracy on earth. This year’s Presidential election has really put a dent in that perception.

Donald Trump may well be the most ill-suited candidate for President that has ever stood for the role, and he will probably lose the race come November 8th, but his bombastic bigoted bullshit has left its mark on our society.

Let’s hope it’s not an indelible one.

Recently there have been several stories from across the world concerning sinister clowns. It seems to have started off as one clown being photographed in odd places and at odd times but has then spread across the world in copycat fashion associated with web memes.

People appear to be genuinely concerned that a clown may appear in their neighborhood.

However, it seems odd to me that the most terrifying clown of them all has been hiding in plain sight for months. 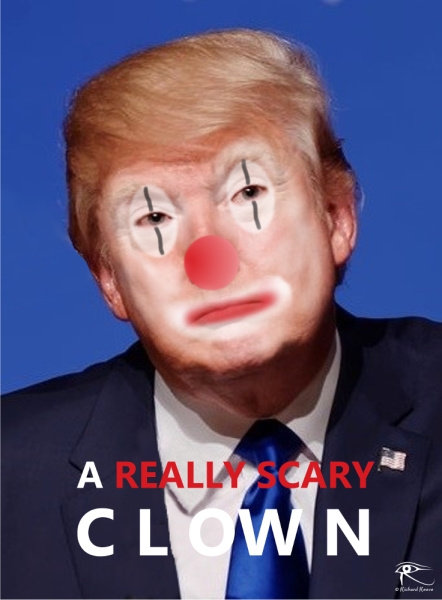 Just imagine if this Bozo the Clown was given any real power, like the codes to the US nuclear arsenal…scary, eh?

A lot can happen in a few days. The Brexit vote in the United Kingdom has shown us just how the real world and virtual world are connected and controlled. In a democratic referendum last Thursday 51.9 % of those who voted (17.41M people) voted to leave the European Union, against 48.1 % (16.14M) who wanted to remain.

The fallout was almost immediate.

As the Pound Sterling fell to it’s lowest rate in 30 years, there were mass protests from both sides, and cries of “foul play” not only from those on the losing side, but strangely, also from many who voted to leave but on waking to the result, think they were cheated somehow. Many have said that they would have voted differently and they only wanted to register “a protest vote.” Others have claimed they were misled, didn’t understand the full implications, or thought their vote “wouldn’t count.” Well, here’s some sobering news – your votes do count!

Still, at least those complaining did actually vote. At 72%, voter turnout was very high by modern standards, but it still means that more than 1 in 4 voters couldn’t be bothered. That’s 13.04 million wasted opportunities for a voice in the shaping their own future!

The glory days of Britain may have waned but this small island has given one last lesson to all who live in a hard-won democracy – USE YOUR VOTE and vote wisely. Most importantly, vote on something you believe in, not against something as a rhetoric-fueled protest.

Consider this wisely as we live in dangerous times.