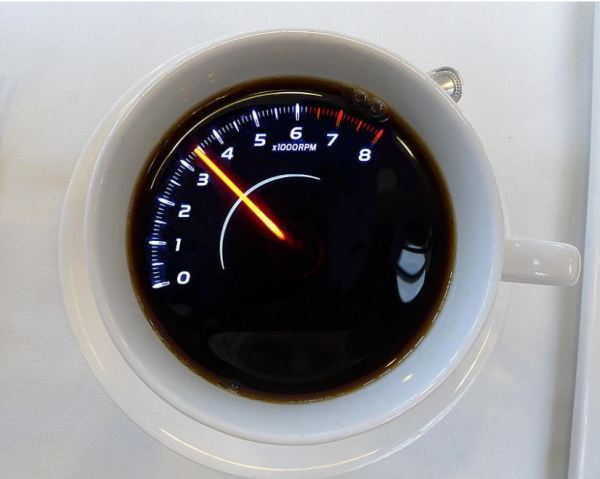 The last few weeks as a corporate cog have been a bit of a challenge, one way or another. Two phrases come to my mind, one from my British heritage in the form of the classic 1959 Boulting Brother’s comedic film, I’m Alright Jack, and the other from the more well known Kubrick adaptation of the Stephen King novel, The Shining.

It was a close run  thing and although the latter inspired me to create the following artwork, I now feel more in tune with the sentiment of the earlier film’s title… 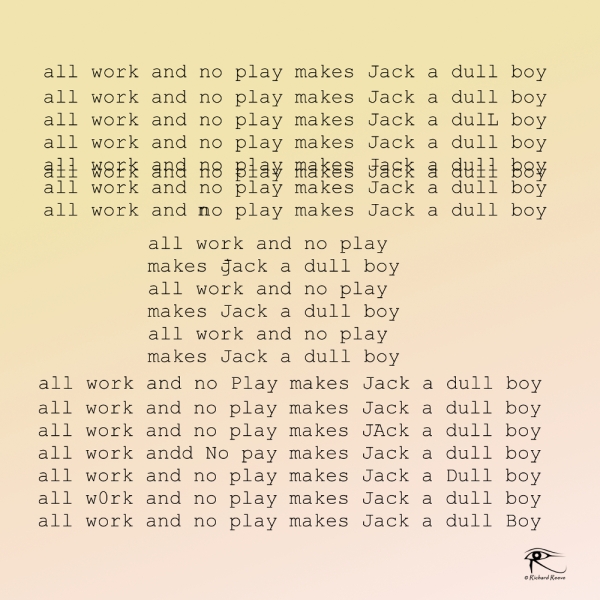 How many more smiling faces can I stand?
It feels like I am but one more good reply from cracking
Empty how are yous and automatic responses
meant to make us feel like we are actually conversing,
even though we don’t say anything.
So few people want to really listen you wonder why they bother to ask!
Not dialogue as that requires two people to socialize.
Many don’t slow in their rush to their daily sanctuary:
a prefabricated box,
bedecked with charms and ephemera from an outside life;
a pretend personal space,
a nest in which to hide away.
How ironic it’s called a cube,
even though the fourth side is composed of a shirt back, not a wall. 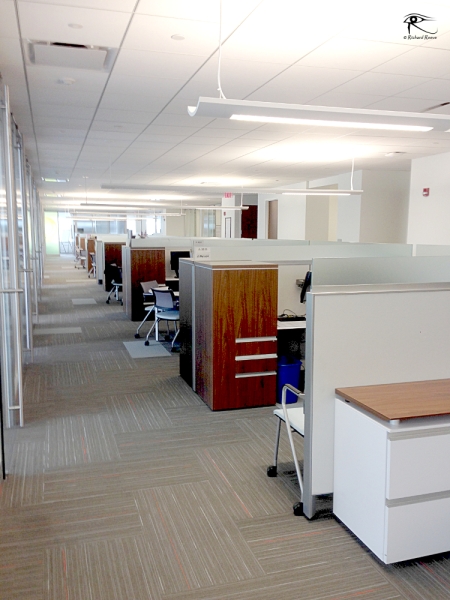 Today I was in a colleague’s office and saw the following inspirational wording inscribed in white text (mixed fonts obviously) on a black square:

“Shoot for the Moon. Even if you miss you’ll land in the stars.”

Me being me,  I couldn’t help but add in my mind:  “eventually…  as a corpse.” which somewhat devalues the wording, but then that’s the way it is with me 😉

Then I started thinking about the value of this as an inspirational business quote. Surely, if the target is the moon, then missing it would be abject failure. Also, considering our nearest star, Proxima Centauri, is 4.24 light years distant (40,113,000,000,000 km) it would be a bloody long time before we’d reach a single one.

So, a quick analysis suggests it’s hardly inspiring at all really, and I am guessing it was not on the walls of NASA Mission Control during the Apollo Program!

Anyhow, I got to thinking about what useful inspirational quote I could develop for the day and I decided on the following adaptation of a well-known cliché, as it still appears meaningful, yet lofty without losing its practical value: 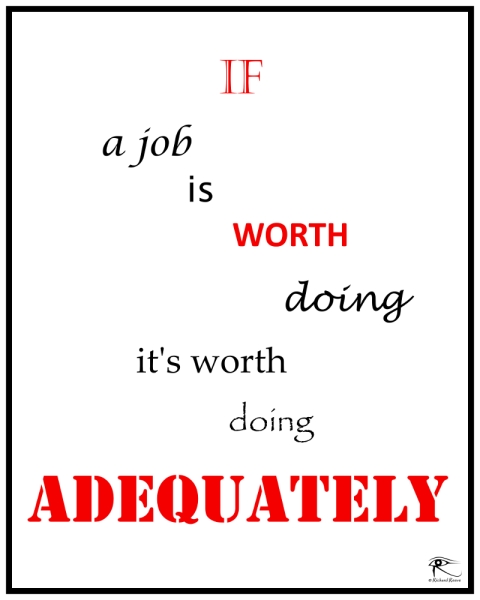 * and I would add that there’s a big emphasis on the word IF at the beginning of this statement that is usually ignored in the original!

a surprise gift on my desk today:

with positive color and pointing arrows,

of perfecting my personality;

meant to mold it

into another corporate citizen

who will nod and smile unquestioningly

and distract us from the realization

that we ourselves are but stock

in a world of cowering complicity,

from which I willingly help myself. 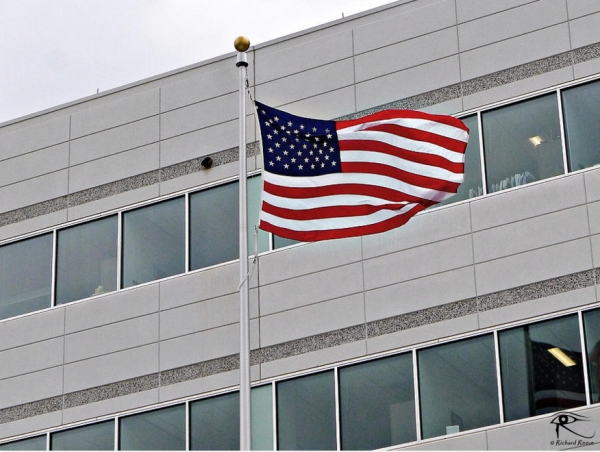 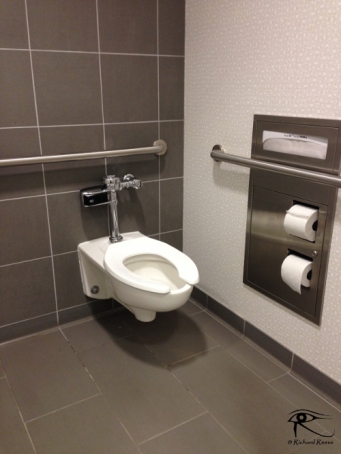 Week 10: Portrait: Environmental – Show a subject in their natural habitat. Their place of work or hobby is a great start. Tell their story with the environment.

I found this to be the toughest assignment so far. I wanted to push my comfort zone in getting out with camera; perhaps creating some street photography. The difficulty for me came with the concept of taking this as a true portrait. I sort of misread the brief a little but I still feel that this shot does meet it as it shows this young lady in the middle of her job writing down a food order for the cook in the food truck. Our only communication was through the little Plexiglas window, which seemed like an obvious frame for the shot. 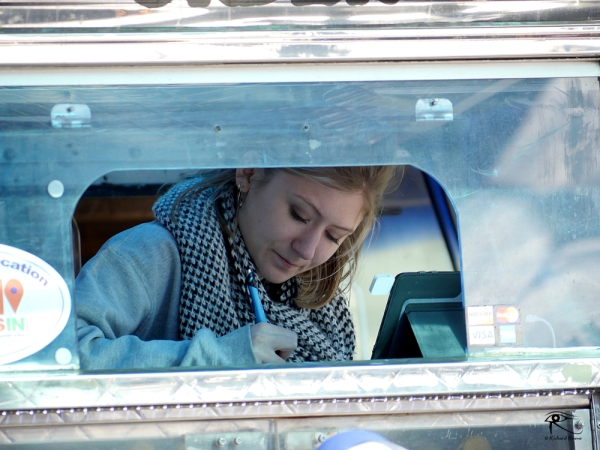 For some reason I am finding Mondays the best day for this type of creativity. Here’s my second office poem of the season…

Searching the room for a face.

To catch the eye

of one who understands

the true purpose of the meeting. 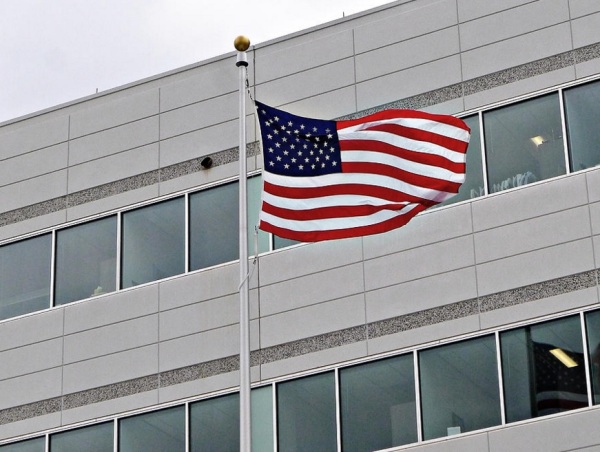 Yesterday was “one of those days,” as we like to say. It’s not that anything went wrong, far from it in fact, but it was a work day which seemed to drag on for longer than it should. Why is it that the evenings and weekends seem to rush us by, like they are only half-days and yet sometimes workdays seem to have hours that contain ninety minutes instead of their allotted sixty, and you can almost hear the second hand of the clock drag itself from one digit to another?

I guess it’s a subtle form of relativity – although in this case it’s not time passing at different rates for two people in different places, but rather one person experiencing time in two different states of mind. Good times rush us by whilst the more mundane days drag.

As if that wasn’t bad enough, sometimes we even find things to support our self-inflicted mood and keep us in that state (or at least I do). Sometimes this can even be with objects that are meant to inspire us, which is perhaps yet another form of relativity. By way of example, I give you the recently decorated “inspiration wall” of our building. This is meant to reinforce our corporate ideals and keep us all aligned to the work we do. 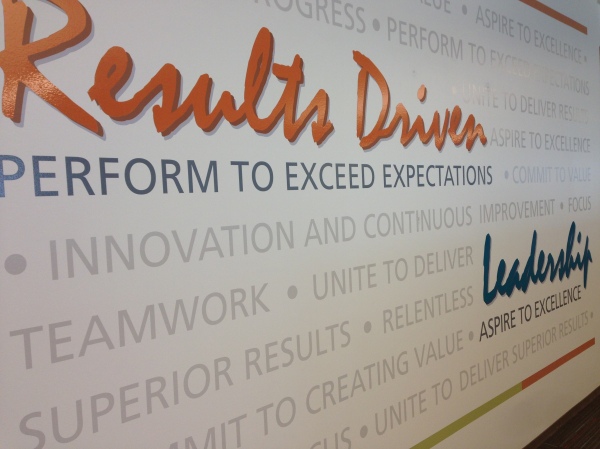 Strangely, the one word that jumped out at me from the wall yesterday was the following: 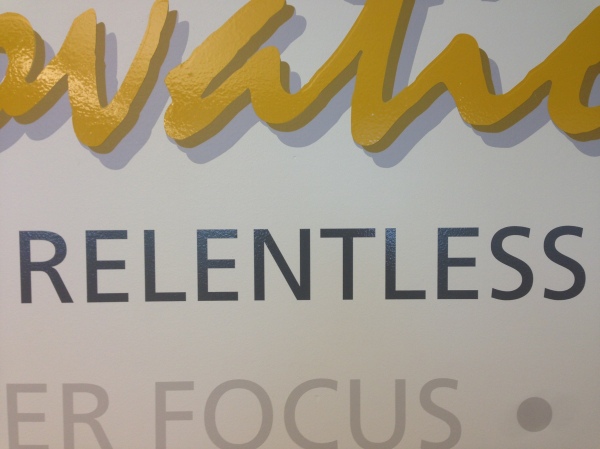 I know it was meant to portray an unstoppable drive to a goal, or some such meaning, but yesterday it seemed an appropriate adjective to sum up a slow day.