With a stifled scream

WEEK 37: Portrait: Fashion – Avant-garde to commercial to traditional, and everything in between. The focus is the clothes this week.

I thought I be a little oblique for this one. Mens’ clothing is fairly boring, at least business attire, at any rate. Historically suspenders (braces, in UK English), neck ties and socks were about the only ways available to enliven that blue, black or grey suit. As we have moved over to belts, and dropped the ties the only thing left is socks.

So here’s a homage to the humble sock, something that can still be used as a fashion statement in the office! 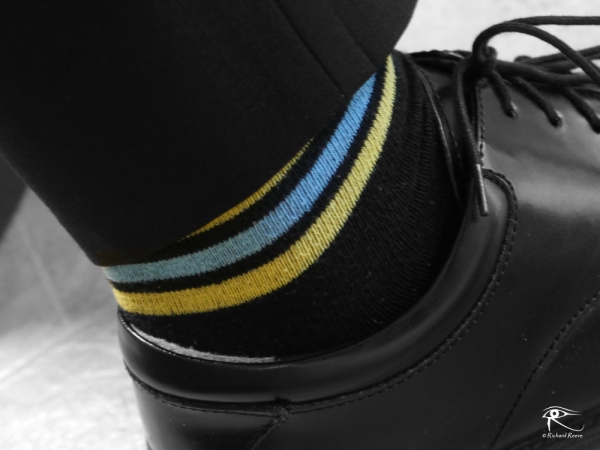 He sits at his desk,

How many more smiling faces can I stand?
It feels like I am but one more good reply from cracking
Empty how are yous and automatic responses
meant to make us feel like we are actually conversing,
even though we don’t say anything.
So few people want to really listen you wonder why they bother to ask!
Not dialogue as that requires two people to socialize.
Many don’t slow in their rush to their daily sanctuary:
a prefabricated box,
bedecked with charms and ephemera from an outside life;
a pretend personal space,
a nest in which to hide away.
How ironic it’s called a cube,
even though the fourth side is composed of a shirt back, not a wall.

I have eluded briefly to the workings of my corporate overlords in a few previous posts, and today I feel the need for another such reference.

I work in a large US office, employing over 500 people, for an international corporation which, in turn, employs several thousand individuals on four continents. Very recently, our local office staff received a mail missive explaining how a new corporate initiative is being launched to connect, inspire and develop us all. This carefully crafted communication explained how the organization is celebrating Diversity and Inclusion as major principles within the work environment and that sharing of ideas will be key to helping to energize us all. These are very laudable goals and ones to which we should all happily ascribe and promote.

The email contained a colorful invitation, in corporate colors, to attend the kick off initiative and enable us to “connect” with key leaders and be inspired by their unique stories of personal and professional growth. It looks like an interesting opportunity to learn more from those who shape our daily routine perhaps, but as I read to the bottom of the invitation there was a statement, written in bold font, “maximum attendance of 40 colleagues.”

How ironic that in their attempt to be inclusive the organization automatically excludes over 90% of the potential audience!

I wonder if I am the only one to see it?

Today I was in a colleague’s office and saw the following inspirational wording inscribed in white text (mixed fonts obviously) on a black square:

“Shoot for the Moon. Even if you miss you’ll land in the stars.”

Me being me,  I couldn’t help but add in my mind:  “eventually…  as a corpse.” which somewhat devalues the wording, but then that’s the way it is with me 😉

Then I started thinking about the value of this as an inspirational business quote. Surely, if the target is the moon, then missing it would be abject failure. Also, considering our nearest star, Proxima Centauri, is 4.24 light years distant (40,113,000,000,000 km) it would be a bloody long time before we’d reach a single one.

So, a quick analysis suggests it’s hardly inspiring at all really, and I am guessing it was not on the walls of NASA Mission Control during the Apollo Program!

Anyhow, I got to thinking about what useful inspirational quote I could develop for the day and I decided on the following adaptation of a well-known cliché, as it still appears meaningful, yet lofty without losing its practical value:

* and I would add that there’s a big emphasis on the word IF at the beginning of this statement that is usually ignored in the original!

WEEK 15: Artistic: Metal – Cold, hard steel. Shiny Aluminum. Or even rusted and broken down. Find your inspiration in metal this week.

Metal, one of my favorite subjects for artistic photography. I love rusty old metal, shiny metal, industrial, forged, ironworks, you name it. I have even tried my hand at blacksmithing only a couple of years back and would love to have my own forge. Heck, even one of my favorite songs of my youth is about it.

I already have a reasonable collection of suitably themed images available but, keeping true to the challenge I decided to try something a little different. Given that I spend 8 hours a day in an office environment I thought I would choose an everyday object from my desk and see what I could do with it using my handy iPhone5. 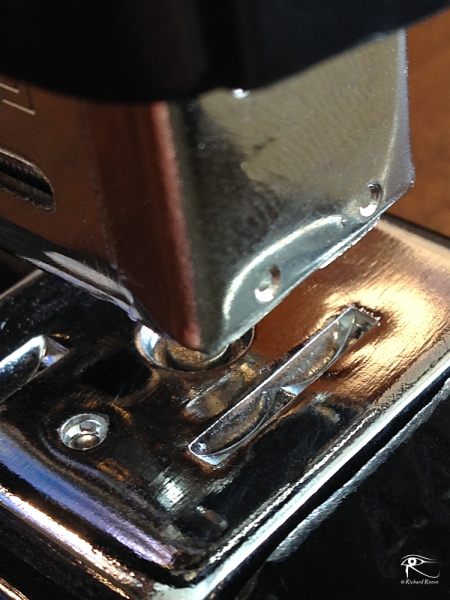