A Saint he was not

as he tore up land and lives.

WEEK 23: Landscape: Weather – This week should be as unpredictable as the weather! Feature the weather in this week’s landscape.

How difficult can this be, fer cryin’ out loud? I am still British (as well as American) so I should have a genetic predisposition to evaluating the weather for hours on end. After all, my homeland is famously described as a country that “doesn’t have a climate, only weather.”

However, this may be one of those instances when too much interest is a bad thing, since my desire for an interesting shot of our summer weather in Pennsylvania has resulted in nothing but procrastination and delay on this assignment for weeks on end.

I may have mentioned previously that I usually keep at least one camera in the car with me so, as there were storm clouds rolling in on my drive to work, I stopped off and decided to get a shot of those to support the rather surprising statistic that July is our wettest month here.

As I picked up my camera I thought I’d make the shot more interesting by creating a high dynamic range (HDR) image to bring out the clouds. This entails taking 3 identical shots with slightly different exposure settings (+/- 0.3EV) to bring out the highlights and shadows and then merging them into one image. The resulting image is technically a low dynamic range representation of the HDR composition following tonemapping, but we still call them HDR photos. Anyway, using the portable version of the superb free software LuminanceHDR I created the following image of clouds rumbling in over the trees and the communication antenna tower near to where I work.

If you’d like to see some more of my HDR work click the image above or here.

Week 4: Portrait: Headshot – You shot a selfie, now shoot a “selfie” of someone else!

As I mentioned in my earlier post on this subject ‘… (portrait) is largely unexplored territory for me to date, other than through reluctantly granted periodic “family portraits,”’ so I felt that this was going to be a tough assignment.

Help came though in a totally unexpected way – through Winter Storm Jonas! Bizarrely, as the storm was heading towards us, the majority of my family left to go on a pre-planned ski trip in Vermont, thereby missing the storm in its entirety. I, on the other hand, was left at home in PA to look after the place, but mainly because I no longer ski due to an accident in the Austrian Alps 10 or so years ago. Staying with me was one of my daughters, and as I was spending 8+ hours shoveling snow to dig a path to the road she, obviously, decided to build an igloo.

Aha! I thought, I will strike a bargain and, as part payment for providing some material for her to use as a roof, she agreed to let me take a few pictures of her. I particularly liked her choice of headgear and I had her pose inside her igloo too to provide an interesting backdrop.  I admit to taking several shots over a short period (1-2 minutes) and I stuck to using my  20mm f1.7 (40mm equivalent) lens simply because I wanted a large aperture as the light was fading. 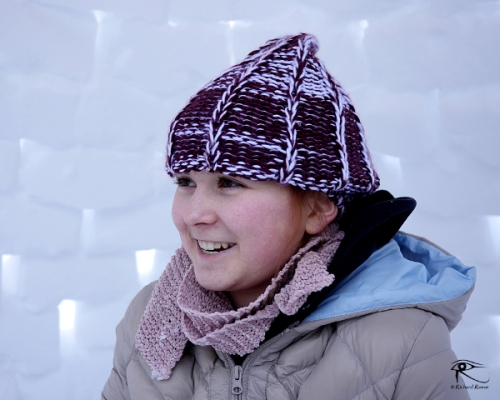 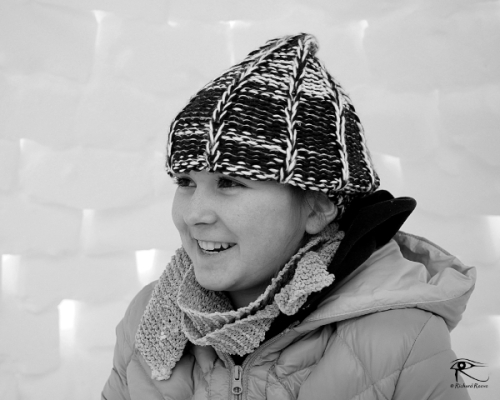 After some minor touch up in GIMP I also tried a black and white version, so this week I offer up two images to the challenge!

I would be interested to see which one is preferred, as it’s a tough choice for me.

Yet another storm brewin’ though …

…so I shouldn’t be surprised when driving home in the heaviest rain and hailstone-laden thunderstorm I have seen.