Giving small gratuities or tips to people for providing a service is part of many cultures whilst being considered offensive in others (e.g., Japan).In some cultures a tip is expected for certain activities, and indeed is factored into the expected income even by the tax authority (e.g., waitresses in the US), whereas in others a tip should be given only for exceptional service above and beyond the expected level.

I used to travel a lot on business from the UK, which does not have a particularly strong tipping culture outside of certain roles, but having lived and worked in the US for several years I now always made a point of tipping cab drivers, bell hops, maid service and waitresses. However, on my recent trip to India I was faced with another dilemma – how much to give as a tip when there is such a discrepancy between local and tourist wealth?

I don’t want to be mean, but on the other hand I don’t want to offend by appearing brash and giving the impression I think that the local currency is of low value. To be honest it’s all rather confusing

For example, I asked at the hotel reception how much would be a good tip for a taxi driver, as was told that it is 65 rupees to the dollar so about 60-100 rupees would be a good tip. So, when the driver dropped me off in town in the early morning I handed him a 100 rupee note and he then said he would wait for me to return, even though I wasn’t coming back to be collected for nearly 4 hours! I don’t know if this was what he planned anyway or whether it was because of the tip, and I admit I had mixed feelings about having him wait that length of time just for me. 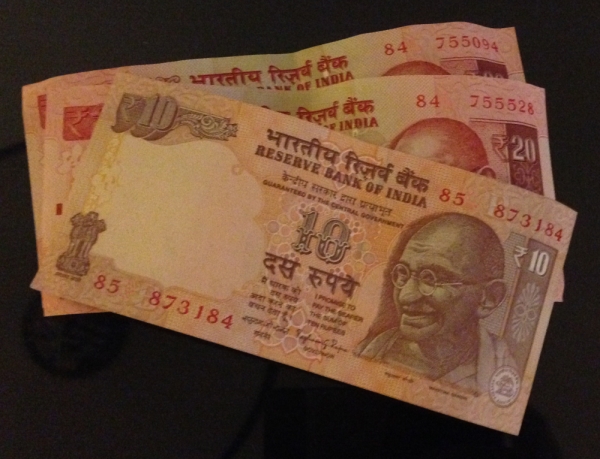 So, to my dilemma: there seems to be no issue with the hotel in which I am staying charging Western-style prices to foreign guests for room and restaurant ($180/night and about $40 for dinner + taxes) yet clearly the staff is not paid western-style salaries.

If someone is earning under $10 per day is it appropriate for me to tip them 20-30% of their daily salary for cleaning my room? I really don’t know. So, I went with my conscience and left 100 rupees ($1.50) the first day and it was accepted. However, on the second day it was left untouched. I don’t know why. I left 50 rupees for the next few days and it was accepted, even though it seems mean to me…

I remain confused and if anyone has any suggestions or comments I would welcome them.

PS: since writing this post I brought up the issue of tipping with some Indian colleagues and they told me that tipping is not generally expected in India, thus adding to my confusion as i had read that is was expected… sometimes… !