Billed variously as “the world’s largest elephant” and optimistically as “the largest zoomorphic architecture in the world” (hmm, if you’ve never heard of the Sphinx, or the Kakadu Crocodile Inn, perhaps?), Lucy the Elephant stands facing the Atlantic Ocean at Margate, New Jersey.

This wonderful old wooden structure, sheathed in tin sheeting, was built in 1881 by James V. Lafferty and used as a tourist novelty and to show the local real estate to prospective buyers for an ever-expanding Atlantic City in the late 19th century.  The six-storey building was originally called the Elephant Bazaar and was topped with a howdah to afford views of the area.  It formed part of a larger complex including Turkish baths as can be seen from this restored PD image, taken in the 1890s: 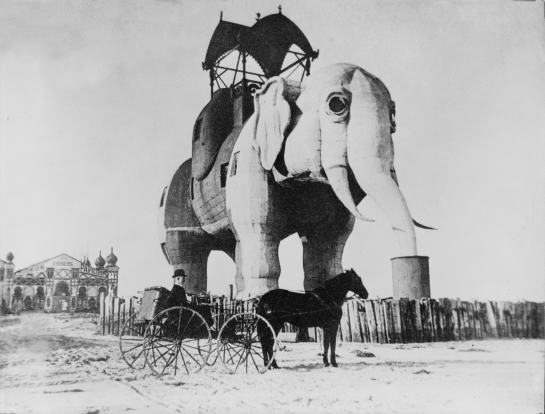 The building picked up the name “Lucy the Elephant” in 1902 after it had been sold and was used for many purposes over the following decades.  By 1969 Lucy was in a poor state and was to be demolished, but a group of local enthusiasts banded together and saved the structure, moved her about 100 yards and repaired her  internally as well as providing a new  exterior “skin”.

She was subsequently designated a National Historic Landmark (amazing what difference a few years makes!) and is now maintained by the Save Lucy Committee who look after her every need!

I confess to never having heard of this wonderful piece of eccentric history until a few months ago, and I plan to visit her at some point in the near future and update this post with a few more contemporary images.  Stay tuned!

One thought on “Lucy the Elephant”