I was in the gym this morning and thinking about what I could use a subject for today’s blog entry when one of the wall screens showed a conference taking place with the banner “National Signing Day” in the background. Being a non-sporting type of guy I was intrigued so, after my workout, I toddled off to the trusty old interweb and “ran a search” as we used to say, in the pre-googly days of dial up.

Now I don’t really have much to say about National Signing Day, or football in general, but I thought it would be great to turn this into a pun about National Singing Day, perhaps (see what I did there?). A quick bit of research showed that, along with all the sad misspellings commemorating today’s “big event” on twitter, there is some limited consensus that a National Singing Day exists (or rather A Sing Up Day) today too!

However, and much more poignantly, I also uncovered that today, February 3rd, is also noted as “The Day the Music Died” since it memorializes the dreadful plane crash in 1959 that killed Buddy Holly, Ritchie Valens, and J. P. “The Big Bopper” Richardson, and their pilot, Roger Peterson near Clear Lake, Iowa.

For my younger readers (!), the phrase comes from Don McLeans’s classic song American Pie, first released in 1971, but it has now become part of American musical folklore.

I don’t think it’s an exaggeration to say that Holly, Valens and “Big Bopper” were early players in a youth culture shift that shaped the attitudes of the western world forever. They moved the focus of the old, staid world towards a more upbeat, positive, freer society that, in turn, paved the way for myriad positive societal changes throughout the US and beyond. Through the medium of music, and showmanship they showed the youth of the era that change could happen from the ground up.

Now, nearly 60 years later, I wonder if some of that spark has been lost as we have succumbed totally to the material nature of the modern world. It seems to me that the youth of today are more obsessed with plastic celebrity than raw talent; being force fed conformity through technology and the fear of making mistakes I wonder if they (and we) have lost something.

Perhaps it is time for those free spirits to be re-kindled and for me to bring up my homage to the simple instruction kit that was used in the 1977 Sniffin’ Glue fanzine some 18 years after The Day the Music Died to inspire the birth of the “punk” movement, and encourage the then disenfranchised kids to pick up a guitar and form a band. 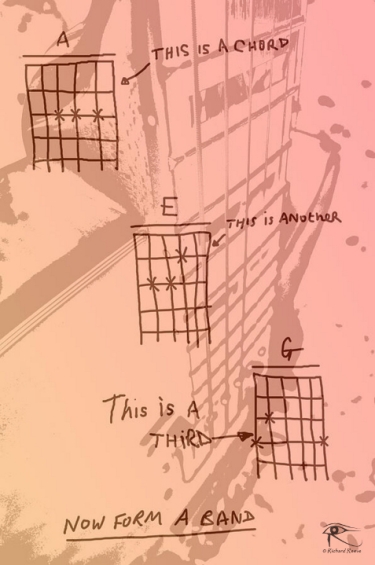